Welcome to Easy Open3D, the easy-to-use wrapper around (as well as utility functions and scripts for) some of Open3D ‘s registration functionality.

In 3D data analysis, the term registration usually refers to the process of aligning two partly overlapping point clouds such that the result is a merged version of the input. It is frequently used to obtain a 3D scan of a large scene by stitching together several smaller parts. In robotics however, we can use the same algorithms to register a 3D model of an object (called source) we want to manipulate to the part of the 3D scan (obtained through depth sensors; called target) of the scene the robot operates in to find its pose in this scene. The pose of an object consists of its rotation and translation in some coordinate frame, typically the robots head frame, camera frame or world frame.

A simple (yet slightly contrived) example

Say we want to find the pose of Blender mascot Suzanne (the blue ape head on the chair) in this scene: 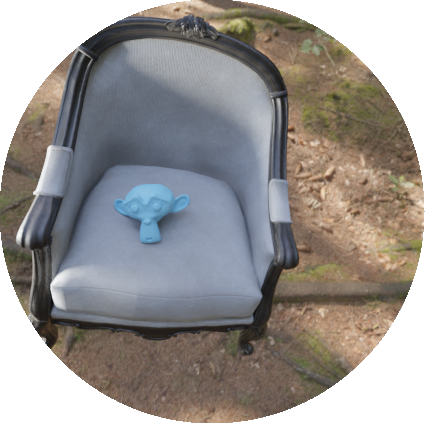 We are also given a 3D model of her (the source) and a depth image of the scene (the target):

The goal is to rotate and move the source around until it matches the position and rotation of the corresponding points in the target. A successful registration looks like this:

The simplest way to install the package is to clone the repository to a local directory:

Use Pythons package manager pip to install it into your current Python environment:

To use the provided scripts, also install the optional dependency scikit-optimize and tabulate:

Alternatively, you can install the required packages manually and directly import the code from your local clone of the repository:

The required packages (and their version used during development) are:

Fundamentally, there are two ways to use this project. If you only want to find the pose of some objects in some scenes, simply throw them at the run_registration.py script (and potentially run the hyperopt.py script to find a suitable set of parameters). If, on the other hand, you need more fine-grained control and want to make use of the high-level abstraction provided by the wrapping, just import the project as you would with any other Python package.

1. As a Python package import

This is a simple example to showcase basic functionality. Have a look at the tutorial.ipynb Jupyter notebook for a more in depth treatment.

The run_registration.py script takes a registration.ini file as input in which paths to source and target data as well as all registration hyperparameters are specified. Provided file paths can either be absolute, or, if relative, must be so in relation to the directory the script is run from. To run the script, simply use the provided entry point:

Alternatively, run it as a Python module, e.g. from within the cloned repository:

To find a suitable set of hyperparameters, the hyperopt.py script can be used which takes a hyperopt.ini file as input, resembling the registration.ini file, but specifies ranges of values to search over, and produces a registration.ini as output with the optimal parameter values found during the hyperparameter search. This can in turn directly be used as input to the run_registration.py script. Again, there are two ways to run the script:

First and foremost, a huge thanks for the creators and contributors of the awesome Open3D package! The example data used throughout this project was created with Blender and BlenderProc. The former being an awesome open source 3D creation software and the latter being an equally awesome open source synthetic training data generator based on Blender targeted at machine learning applications.